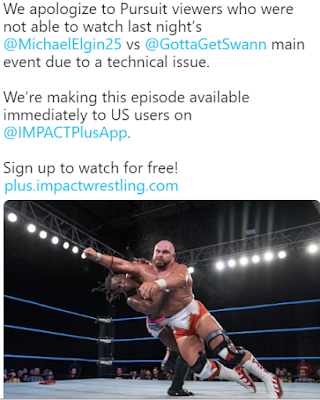 If you were watching Impact on Pursuit you may have noticed the main event went to commercial break and never returned. Well, above is the official statement from Impact and their way of making up for it. Note that the Twitch stream did not have the same issue.

In related news, it looks like the company is set to have a few roster changes soon. Elgin came in, but Kross wants out. Grace, who apparently has been working on a handshake deal, is likely heading to AEW though Impact is trying to sign her now. And, lastly, Scarlett is seeking a release, too.

UPDATE: Jordynne has signed a deal with Impact.
Wrestling